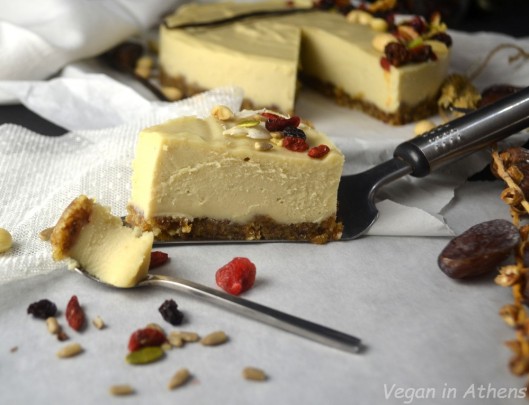 …or maybe the most delicious and healthy vegan recipe for an unforgettable white chocolate experience without sugar, gluten or baking. The truth is that raw vegan desserts are our favorites, especially when we are talking about cheesecakes with a creamy stuffing and a base of crunchy nuts and dried fruits. What I like the most is the unlimited variety of ingredients one can use in the creamy stuffing – nuts, fruits, nut-butters, zests etc – making each time a totally different dessert. The only thing we need is a relatively good blender!

This time, the basic concept of my recipe was to make a dessert with a rich white chocolate taste and the amazing aroma of vanilla. These two ingredients may have a prominent position in our olfactory and tasty memory, but on the other hand, we don’t meer them that often in the plant-based kitchen. However their combination is something I always considered magical and that’s why I planned to use it this time in order to make a white chocolate vanilla raw vegan cheesecake. You may ask yourselves how can we make a raw vegan dessert with the taste of white chocolate and the scent of vanilla? Simply by using raw cocoa butter and the small black seeds of a natural vanilla bean in its preparation! Relatively small amounts of these two are enough!

Indeed, the result was even better than what I could imagine! The cream is just mouthwatering with a sweet taste thanks to the agave syrup, a beautiful vanilla aroma, a silky, creamy texture and an intense chocolaty flavor thanks to the cocoa butter whick makes this cake unbeatable! Raw nuts , ground together with sweet dates make the crispy, sweet, dense base that holds the cake and adds taste and texture to the recipe.

for the white chocolate cream 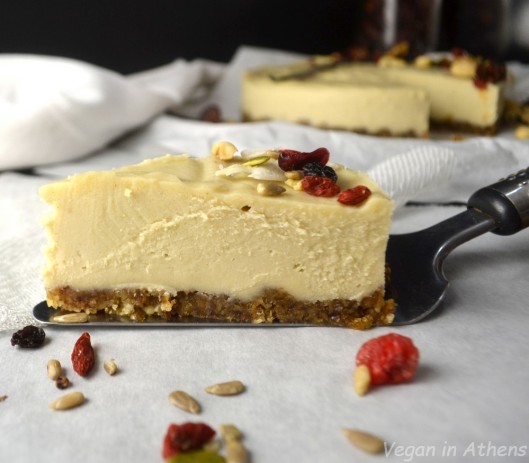 1. For the crust: Wash the dates, drain and pit them and put them in the food processor along with the nuts. Process for a few minutes until a soft dough is formed. If you do not like the small pieces of nuts in the base, process the nuts until they become powdered and add the dates afterwards.
2. For the white chocolate cream: Put in the blender half of the cashews, lemon juice, agave nectar, water, vanilla and the melted cocoa butter and blend for 3-4 minutes until the mixture is creamy and uniform. Add the rest of the cashews and blend for few more minutes until they are incorporated in the mixture and the texture of the cream is smooth and homogeneous.
3. Assembly: Line a cheesecake pan of 20-22 cm diameter with greaseproof paper and spread the crust mixture over the bottom. Press with your hands to distribute equally and form the crust. Pour the white chocolate cream on top of the crust and refrigerate for 8-12 hours to set.
4. Before serving garnish with chopped nuts, seeds and dried berries. Keep in the fridge.